with Parag Khanna Author of The Future is Asian, Move: The Forces Uprooting Us 30 December 2021

Dr Parag Khanna is a bestselling author of books that explain where our world is heading and why. Parag, who has been named by Esquire magazine as one of the 75 Most Influential People of the 21st Century, will be talking to Humphrey about his latest book Move: The Forces Uprooting Us. It’s a thought-provoking eye-opener that cuts through the clutter and predicts what lies ahead for our children and grandchildren. In short, as climate change tips toward full-blown crisis, economies collapse, governments destabilize, and technology disrupts, we’re entering a new age of mass migrations – one that will scatter both the dispossessed and the well-off.

Which areas will people abandon and where will they resettle? Which countries will accept or reject them? As today’s world population, which includes four billion restless youths, votes with its feet, what map of human geography will emerge? Parag is a total man of the world. He was born in India and grew up in the United Arab Emirates, the United States of America and Germany. He earned his doctorate at the London School of Economics and his degree at Georgetown University in Washington, D.C., which is where his love of maps and the changing world really took root. His previous books include How to Run the World (2011), Connectography (2016), and The Future is Asian (2019). Join Humphrey with Parag at 12.00 UK time on November 18th for a fascinating insight into our future. 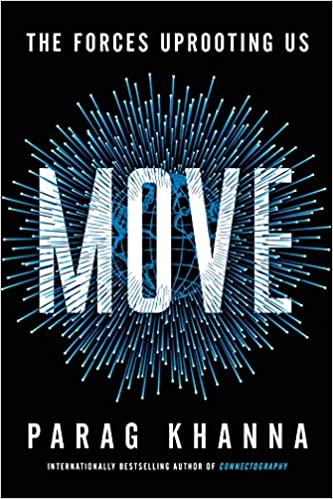