with Lena Sisco Author of You're Lying 24 February 2022

Goldster Book Club is thrilled to take you inside the stories of all the stories with former American naval interrogator, Lena Sisco, telling Humphrey about her book, You're Lying: Secrets From an Expert Military Interrogator to Spot the Lies and Get to the Truth.  With her many television appearances, Lena has earned the title of ‘celebrity lie detector’. Ask her how you can know when you’re being lied to and best to get the truth of someone who doesn’t want to tell – a teenager fallen in with a bad crowd, a two-faced boss, a sales person trying to rip you off.  But Lena’s experience goes far deeper,  and she will be telling Humphrey how she questioned terrorists in American’s Guantanamo Bay prison camp to find out when or if another attack was planned. Lena has questioned numerous members of Al Qaeda and the Taliban at Guantanamo Bay, and went on to teach her skills to Defense Department personnel for years afterward.

Her ability to build rapport, accurately read body language, and employ effective questioning techniques undoubtedly saved numerous lives. During her hour on Goldster Inside Story Lena will give you an easy-to-follow five-step program on how to detect verbal (both spoken and written) and non-verbal deceptive tells, how to conduct an effective line of questioning, and what to do after you identify the lies we all face every day.  A rare Goldster hour with a fantastic expert straight from the world of James Bond, Jack Ryan and George Smiley --  Humphrey with Lena Sisco Thursday 24th February 2022. 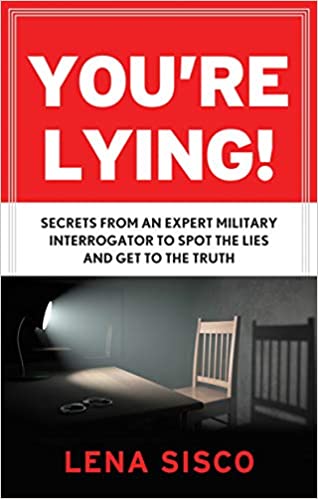