Hilary Brown is a pioneering, boundary-breaking journalist who covered wars from Vietnam to Iraq and was the first female foreign correspondent hired by the American television network ABC News. She was one of the last journalists to be lifted by helicopter from the roof of the American Embassy in Saigon in 1975, during the Communist takeover of South Vietnam. One of Hilary’s ABC reports appeared in the Oscar-winning blockbuster The Deer Hunter (1978), which she modestly refers to as her ‘fifteen seconds of fame’.

During the 1980s, Hilary was lead presenter for the Canadian Broadcasting Corporation in Toronto, an experience she describes as ‘death by hairspray’. She later returned to ABC News for another 18 years to do the work she loved best: foreign news reporting. Colleagues have described Hilary as intrepid, glamorous, funny and occasionally reckless and, now, she has told it all in her amazing autobiography War Tourist: Memoirs of a Foreign Correspondent, which takes the reader on a thrilling journey through 19 war zones and newsrooms around the world.

Join Humphrey Hawksley and Hilary Brown, at 6pm on 6th January, for a no-holds-barred Inside Story about the highs and lows of working in dangerous places, of being a woman in a man’s world, of marriage and the heartache of losing her husband and, after finally hanging up her flak jacket, finding love again, which keeps her in a constant state of excitement and not knowing what’s going to happen next – just like being a war correspondent. 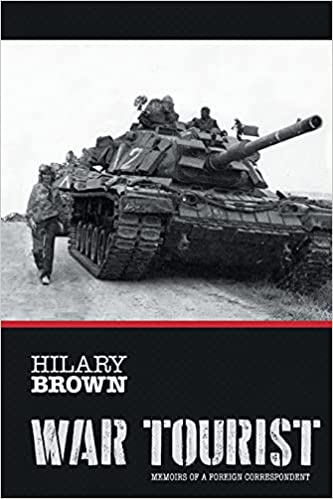