James Rosone and Miranda Watson are one of the most successful self-published husband-wife writing teams on Amazon. James began his writing career as a form of therapy after his experiences as an interrogator in Iraq. He has turned a hobby into a career. In her spare time as a nurse, Miranda helped him. Both James and Miranda have now given up their day jobs to write best-sellers, often bringing in other co-authors. The series include Falling Empires about cyber-attacks and the threat to America from within, Red Storm which includes a volume called Battlefield Ukraine, and The Monroe Doctrine, which in its range of issues includes Artificial Intelligence and China. In conversation with James, Humphrey Hawksley will explore the crime-thriller genre asking what issues and types of characters attract. He will also ask James and Miranda to share their incredible experience of self-publishing from their first book to their successful formula now. James will also tell how he encourages other military veterans from the Iraq and Afghan wars to find a new purpose as authors. We all read stories about the millionaire self-published authors, but rarely do we get to know how it actually works. From writing to technical social media wizardry, from world turmoil to casting the compelling lead character, join Humphrey with James Rosone Thursday September 1st 2022 on Goldster Inside Story. Hopefully, Miranda will break free from her schedule to join them. 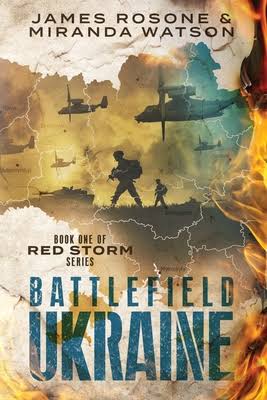